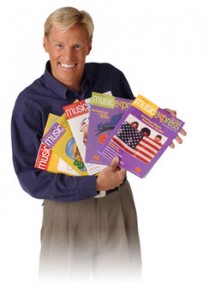 It’s Christmas day! Many of us are stuffing our bellies and putting on comfort food pounds. We are carelessly tipping the scale and it’s all in the name of the holiday spirit. But the scariest part is that so many of us are inactive during the holiday season and often stricken with boredom. Even in a society with so much technology and opportunity it is rare that we come across talented and successful people who contribute something to society that helps others. I did, however, speak with a talented man named John Jacobson who has created a number of captivating videos that help kids and teens become more active.

Especially during Christmas break, many young people find themselves in front of the TV or computer (myself, for example). It’s not often enough kids are outdoors playing with other children. This why John is such a gem, because he creates videos that change kids’ attitudes. He teaches the value of music, singing, dancing and the arts. He has always been a fan and has been active in the field for over 25 years and growing.

John Jacobson , a music educator, choreographer and Presidential Point of Light of America Sings! Music Express and jJump. John started jJump 5 years ago. John and his team wrote a bunch a songs about fitness, cardio and stretching. He also has a magazine called MusicExpressMagazine.com which is yet another vessel John utilizes to reach the youth. He has become a Youtube sensation almost overnight. He is already being approached by popular talk shows like The Ellen DeGeneres Show, Conon O’Brien, andThe Graham Norton Show of BBC America .

You may not know him by name but you may have seen his videos or remixes of them.

The video is available at http://www.youtube.com/watch?v=dm7yAWpX1Mc. It’s called Double Dream Hand! It has over 1 million hits within a week and is constantly growing. If you haven’t seen the video, check it out! John explains the inspiration for these videos by emphasizing that, “There is rarely any material for preschoolers about getting out there moving; even on a rainy day.” These videos are FREE for anyone to download or even use in the classroom. The MusicExpressMagazine.com is where they publish the videos and are locally recorded in Los Angeles. Teachers can subscribe to it and go to the website in order to teach students to dance.

With shows like Glee, no wander John’s video has become an online hit. When asked if he likes the TV hit show he replies,” Well, I love what it is doing for music education…it’s a prime time show for all genders.” He shares his concern for the lack of more music and the arts in schools by suggesting the “choir room” should be celebrated in our schools. He continues by saying,” I wish they would do a Glee Junior, targeted to them [younger kids], but with subject matter that would be [hint hint GLEE producers].

Some of the remix videos are just a delight to watch. A favorite seems to be the Double Dream Hands mashup- All the single ladies!.mov. It’s a rendition of John’s original video mixed with Beyonce’s hit song, Single Ladies. I asked John how he felt about the video and this is what he said,” I love it! I want to meet Beyonce and do it live.” Clearly, he’s a good sport about the whole ordeal and looks forward to the exposure it brings to his organization.

John is a man with many hats but his most current project is Imagiboc which are videos for preschool kids. “They are kid songs where they [children] act like a storm coming in, they act out the wind and leaves, thunder and more.” He will sing some lyrics and leave some blank. It’s great fun for young children and educational at the same time.

This author has yet to write their bio.

No comments so far!